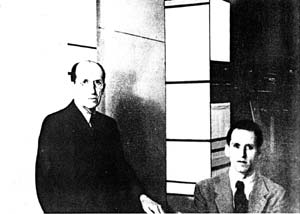 Harry Holzman discovered Mondriaan as a great artist when he was 22 and Mondriaan 62. He saw two paintings of Mondriaan in New York and although poor at that time he wanted to meet the painter who had made them. He went to Paris where Mondriaan lived. Mondriaan was still a poor man at that time. Holzman stayed for four months and they had a very intense contact. When they had to part, Mondriaan said that he felt as if Holzman was a brother of him. When he had been younger, he would have gone to the USA with Holzman, he said. In september 1938 Mondriaan flees to London for the war that he feels will come. After the breaking out of the war and german bombardments of the neigbourhood where Mondriaan lived, he is eager to accept Holzmans offer to pay the passage to the USA. In New York Holzman helps him and introduces him to other artists, galleries and museumpeople. Mondriaan lives in New York from october 3, 1940 till january 31, 1944 when he dies 72 years old. Harry Holzman becomes his heir.

I was always hoping to be discovered by a man with a nose for new developments in art, a man who perhaps could make art-museum directors make attentive of my work. When I red in the paper that Hary Holzman had given a reading on Mondriaan in Holland I wrote him a letter. With a good number of photos of my paintings. He wrote me a nice letter back, the one of july 9, 1973. Then after visiting me and seeing my work, he wrote the letter of february 3, 1974.

I find such words of a man who can discern between the important innovative art and the great mass of unimportant art that one can see everywhere, important and it gave me a little hope after so many disappointing reactions of dutch museumpeople. I would like to go on silently, undisturbed with my work, as a hermit, but I know my work could be enjoyed much by all lovers of abstract art. But they will only know my work when I do my best to break through to a great public, perhaps by way of internet. But now I stay amidst many hundreds of other artists. One great exhibition in an art-museum, with a bit of publicity which so many bad artists get, would probably be enough to make me known outside the little circle of people who know my work, but are not able to change my situation. Harry Holzman was himself a painter and although he became a multimillionair being Mondriaans heir, it did cost him a lot of time too to promote Mondriaan, to collect his reproduction rights, etc., etc. He always stayed at my home when he came to Holland, told me a lot about the “New York School” of which he knew all the members, but that was all.

I would like to show the tremendous possibilities there are to express every feeling in paintings and drawings in a modern way. I want to move people as the last string-quartets of Beethoven move me and the later tranquil pianoworks of Liszt, the early works of Anton Weber and the works of Charles Ives.

The photo’s of my work should tell enough but everybody knows that most people seek a strengthening of their meaning by others. That is why I put these letters on Internet.